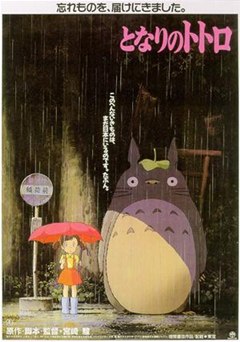 Are you familiar with Studio Ghibli? It's the dreamy Japanese animation studio responsible for anime classics Spirited Away, My Neighbor Totoro, Kiki's Delivery Service, and Howl's Moving Castle. Regarded as highly inventive, serene, and spooky, Studio Ghibli puts out internationally renown films, loaded with magic, monsters and lovable creatures, such as Totoro (pictured to the right, and above).

The studio is also famous for its adamant "no-edits" policy when licensing their features abroad. (True story: When Miramax co-chairman Harvey Weinstein wanted to edit Princess Mononoke to make it "more marketable", a producer from Studio Ghibli sent him an authentic katana with the message "No cuts".)

If you're already a fan, and a Minecraft player to boot, you'll be ecstatic to hear that Oz Workshop has created a homage to the highly regarded studio, recreating beautiful scenes from Ghibli classics in true Minecraft block-form. Minecraft players can now enter the Ghibli-themed map, and while it's only 90% complete, there is a large map available as a free download. You can tour the Ghibli World in the video below.

For Studio Ghibli fans reading who aren't familiar with Minecraft, it's a customizable video game world, in which the player has the ability to use the game's mining, building, farming, and limited combat mechanics to construct whatever world they like. Interested in learning more? Then check out this fascinating article on Markus Persson, the game's creator, by our in-house video game expert, Nick Battjes.

;_; I wanted to write about this lol. We saw it on the weekend and were really stunned at how amazing the world they created is. Playing Minecraft you sort of take pride in the little things that you do, like making your first small one way rail way or building a very nice house. These people built entire sections of movies!

If you download the map make sure you have the texture pack that makes it look so good. It's the Aza's Arid Pack.

This just got me really excited for Ni no Kuni.

Wow! Minecraft is extraordinary!! It plays out like that show Lost... You know, you think your all alone but really your not!