In the mid '90s, there was no such thing as a widely available indie video game. Brick-and-mortar stores were the only places for consumers to buy games, and magazines were the only outlets to hear about them. For video game creators, the need for a publisher to market and distribute was logistically essential to attract players.

In '94, British gamemaker Andy Davidson programmed Total Wormage as an entry in a Blitz BASIC programming competition for Amiga. It didn't win, but Davidson believed in his turn-based strategy combat game, and wanted it released to the public. Today, he could have just put it up on his website, as Markus Persson did with Minecraft, or jump through a few hoops and get it released on Steam. But in this era, neither was possible. If Davidson wanted his game to reach players, he needed a publisher.

So he shopped the game around to some, failing initially, until he took it to a small British publisher. Team17 snapped it up on the spot, polished the game up to commercial standards, and released it for the Amiga in 1995. Worms, one of the most popular franchises in PC gaming, was born. 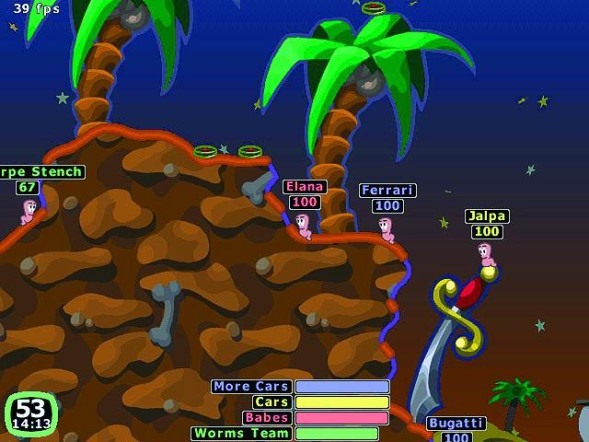 There is nothing outwardly indie about the Worms series today. There are at least 18 Worms games, all of which are published by huge companies like Microsoft, THQ, Sega, and Codemasters. Andy Davidson stopped working on it more than a decade ago, and since then the series has spawned a pinball spinoff game, gone to 3D and back again, and generally gone through all the things that a big, sold-out, tired series of games do.

This story raises several questions. Are any of the Worms games indie games? Is it fair or relevant to question whether a game from that era is indie or not, given the lack of indie distribution options available at the time? Would the series have enjoyed a better, worse, or comparable fate if Davidson created it today and could have potentially finished and released the original game without a publisher?

Davidson made the original Total Wormage game himself (at least most of it—Team17 did a lot of work to help finish it before release). The ensuing spin-offs—Worms: The Director's Cut, Worms 2, and Worms Armageddon—subsequently earned the indie nod as well. After that, no dice. Davidson stopped working on the games (or any other games), and meaningless sequels started coming out every year with big publishers. The indie sheen had faded.

It truly was impossible for a game to be indie and available to the public back then, for the reasons mentioned above. Davidson's commitment to the series obviously waned eventually. If it was still controlled by him, it probably would have died there instead of becoming the played-out mess it has become today.

If you don't own a Worms game, preferably Worms 2 or Worms Armageddon, it's not too late to exprience the glory days of this old-school indie franchise. Worms Reloaded, an expanded 2D Worms games in the style of the originals, is available on PC or Mac via Steam for $20. If you own an Xbox 360, you have the cheaper option of buying Worms 2: Armageddon on XBLM for 800 points, or $10. You can also download the iPhone version for $2.99 in iTunes. Download now to revel in the simple joys of blasting your fellow worms into worm-dust.

I would say that Pong was the first Indy Video Game... but perhaps my definition of Indy is off...

Pong was developed by a man named Allan Alcorn at the behest of Nolan Bushnell, then-CEO of the Atari Corporation. That all but disqualifies it from being considered "indie" in the strict sense of the word.

The very first indie game I'm aware of is the CRT Amusement Device of 1947, developed by Thomas T. Goldsmith Jr. and Estle Ray Mann. It used an analog display like that of an old military radar system and physical screen overlays to depict targets.

There weren't any major game software companies back in the day. So you could say all of the earliest games were Indie.

Most of them were, certainly. But many others were made by engineers at large companies in the name of product development.

Tennis For Two in 1958, arguably the first game with real graphics, was sponsored by the US Department of Energy to promote atomic power. What tennis has to do with atomic power, I'm not sure. Missile Command would have worked better.

indie or not, as long as I like it!