Are you having problems because the game was released a long time ago and the more experienced players are better than you? Then you should be very excited to find out that I will be giving you some general tips & tricks about the different classes that I have learned the hard way.

Now let's get one thing straight from the beginning. Bad Company 2 is an objective and teamwork based shooter.  That means that the actual shooting part comes third. If you put a group of hardcore Modern Warfare 2 players against a group of hardcore DOTA players, the DOTA players would win hands down every time. That is because they work as a group to accomplish the team objective. Now the MW2 players on the other hand would be after the kill, and possibly half of the team would be recon. When choosing between getting a kill and defending an objective, the objective SHOULD be to win every time. And it is seriously annoying when someone leaves an objective to go after some recon they saw in the bush.

Secondly, join a squad. This will let squad mates spawn on you after they die. It will now be easier to advance since you know that you probably won't be alone for long. You gain neat experience bonuses when you help out a squad mate in some way.

There are 3 different types of handguns. 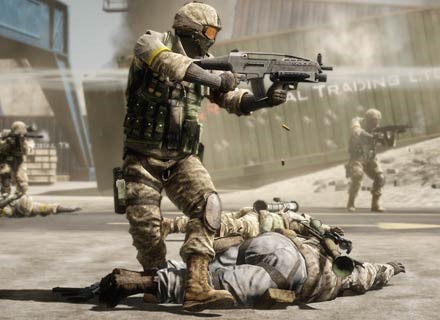 The assault class is equipped with assault rifles (obviosly) and either grenade launchers, smoke or underbarrel shotgun as well as ammo boxes. Your job is to be the tip of the spear and kill anyone that comes between you and the objective of the game mode. Your range is medium to short. If you can't discern a face on your target, don't bother revealing your location. And always be on the move because you won't believe how fast you can be flanked in this game.

If you get bogged down with some teammates, throw down an ammo box. This can earn you a lot of points. It can also be a good idea to throw down some smoke in the direction of the enemy, and flanking them to free up the teammates that they were "bogging down". But generally you are a head on kind of guy that rushes toward the danger.

Weapon combinations are really up to the player to decide. In an urban environment (short range) depend upon rate of fire rather than damage per shot. My personal favorites for this is either FN2000 or M416. Now for long distance, damage and accuracy is your friend. A weapon like M16 (my favorite for medium fighting) can be devastating with the 4X scope. I have even seen one assault bog down an entire group by himself. Just lay down an ammo crate and be aware of projectiles (rocket and grenade launchers). 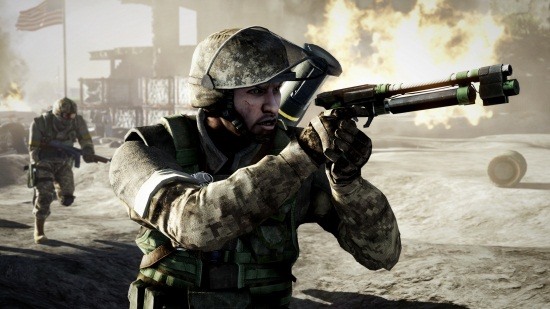 The engineer is equipped with SMGs, rocket launcher or mines and a repair tool for vehicles. Your job is to enter buildings and other short range places first, and clear it out before moving on to the next one. Or possibly camp there. That is where you are most effective. The moment you see a tank icon in the minimap you should hurry to take it out. Tanks can make or break an assault on a base.

The basic tactic when playing engineer is to avoid conflict. If you turn a corner and suddenly there is an assault reloading his weapon, great. Another 50 exp for you. But don't run toward the enemy. You are far more likely to succeed when you sneak behind them and flank their medics and recon. I have a friend that only played the engineer in his first month of playing. He got the 200 knife kills before he got 500 SMG kills achievement. Because of that he flanked recon and such.

Another thing you can do is to expose the enemy hiding with your rocket launcher. It can be really disorienting to suddenly be half dead and you can't see a thing because of the dust. But please don't be one of those guys that get the Carl Gustav rocket launcher and uses it against infantry. It will get people really mad and will most likely get you booted from the server.

For engineers, weapon combinations are a bit different than the assault. I feel that the weapons really don't have a huge difference between them. It comes down to personal choice. I recommend that you try every gun and see which one you like best.

As for secondary. You have 4 options: RPG-7, Carl Gustav, M2 and Anti Tank Mines. The RPG-7 is best when used at short distances and has better damage than the CG or M2. But on the other hand it travels slower and drops more over longer distances. It travels 25% faster and does not drop when locked on to a tracer dart. But be aware that the tracer dart gun takes the spot of your pistol, which can be a lifesaver with your small ammo clip.

CG on the other hand is a fast and true rocket that does not do all that much damage (well, compared to the others. Its still a god damn rocket launcher). Intended to be shot from afar. The M4 is somewhere in between on the damage. But the thing to note is that it can be controlled in flight like the Half Life 2 rocket launcher. This makes it good for taking down choppers or shooting tanks from even farther away than the CG. The downside is that you can't just pop out, shoot, the scurry to hide again. It requires that you stand there and guiding it for possibly 5 seconds. The AT mine is to be used only when you are defending. You just drop it on a road and hope someone drives over it. It takes two to kill a tank, one for everything else. 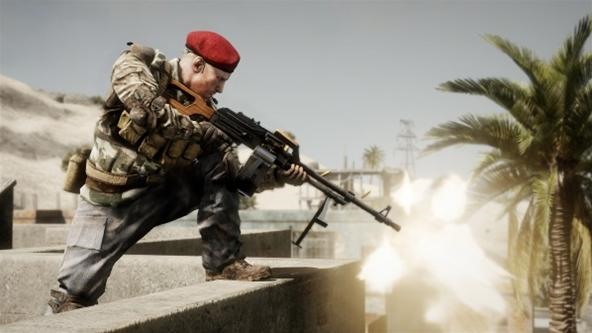 Now medics are probably the easiest class to earn a lot of points in. Of course there are some skills to master like when or where to revive, but you soon get the hang of it. The Medics are equipped with light machine guns, defib paddles and medkits. If the medics have a range I would say medium to short but they are not an offensive class. Don't get me wrong, you can take somebody down. Just don't expect to win when you face an assault head on.

The best place for you is just to stay slightly behind the front line where you can easily reach people to revive them. Now speaking of reviving, remember. They died for a reason. Whatever killed them can still be aiming your way so make sure the immediate surroundings are safe before you revive.  Remember that they are most likely going to be disoriented for a second or two after they get up.

If you really want to be a killer and a medic, I suggest hiding in a building with something with a high ammo capacity and a high rate of fire. Otherwise you are just going to have to get kills the old school way. But do remember. Your first priority is to keep the guys around you alive. Your gun is meant for self defense, not offense.

As for the arsenal it is the same as for the assault. High damage for long distance a la the M60 and for close up choose something with a high rate of fire a la the MG3 or the M249. Also, the medic with his 100 or 200 round clip is the only one that I recommend to carry a tracer dart gun. Everyone else can way too easily run out of ammo in a fire fight, and have to reload, instead of just whipping out your pistol. 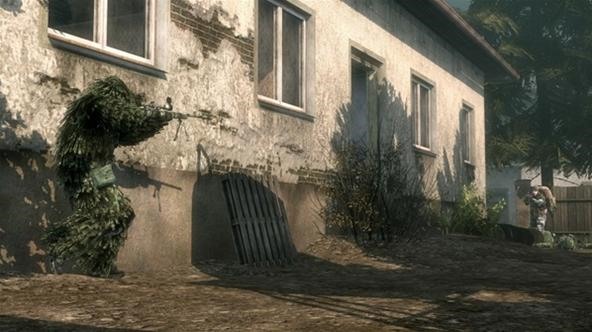 First, let's get one thing straight. The class is called RECON and not sniper for a reason. Your first and most important job is to spot. That's the Q button (or the SELECT button for consoles). Remember to do that whenever you see someone. It should be done either before or while you shoot. The reason is simple. When you spot somebody, they get an orange dot over their head that everyone on your team can see. It is also useful because if you miss and he hides in a bush, an experienced RECON can most likely take him out while he hides if he has the orange dot over his head.

The recon comes with a sniper rifle, motion sensors and C4 or mortar. C4 being the defensive version and mortar being the offensive. One trick you can do with the mortar is that you send them towards an m-com station in rush mode that has been activated. This means that everyone who wants to defuse it has to go trough your rain of fire. This will most likely earn you some kills each match. If you are on defense you can put some C4 where the attackers are most likely to hide after arming it. That way it will be one less to take out before it blows.But remember your C4 can damage the m-com even when you are on defense.

The arsenal for a recon is a "know-thy-terrain" kind of thing. If you plan to be doing some long distance sniping, I would recommend something with a high damage and accuracy. I have seen players with a high fire rate weapon take somebody out from across the map but it is much easier if you have something like the M24 or the GOL. But the reason someone shoots across the map with for example the SVU is that that person knows his weapons limits and range. Don't try to be that guy. Just let it come naturally.

The one thing that separates Bad Company 2 from other shooters is that they employ bullet gravitational drop technology. The bullets or projectiles drop over time and distance. Just be sure to know your gun and compensate. Marksman headshots are the most satisfying to get.

The different classes are very different and require different playstyles. The assault is a straight forward kit that does not require alot of strategy, but skill. The engineer on the other hand is the one requiring the most strategy to play effectively. The medic is perhaps the easiest to play well by just hanging back and reviving a teammate or throwing down a medkit from time to time. The sniper is the one requiring the most skill of them all since it is only you that can get your points for you, not some medkit. Also because of gravitational bullet drop.

If you follow these tips I would be happy to go online with you.