Japanese people are into many things Americans find weird—like YouTube's beloved canine-hosted cooking show or Daito Manabe's light up LED grills or even more insane, a vending machine that distributes live crabs. In light of these cultural oddities, the Japanese phenomenon of visual novels (NVL, or bijuaru noberu), seems relatively normal. A meeting place of books and video games, visual novels are a sort of "Choose-Your-Own-Adventure" for the new generation.

NVLs have been huge in Japan since the early '80s and represent the majority of PC games released there. Americans are finally beginning to get in on the action, perhaps most notably with Christina Love. Her previous NVL, Digital: A Love Story, was quite popular and is still free to download on her website, along with her newest effort, don't take it personally, babe, it just ain't your story (PC, Mac, or Linux). I recently played all the way through DTIP (an abbreviation of the aforementioned game for brevity's sake) and found it a very satisfying first NVL experience for someone who is a voracious gamer, reader, and voyeur. 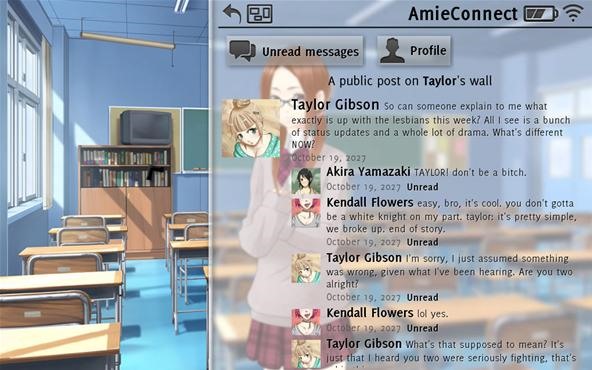 DTIP takes place at an exclusive private high school in Canada in 2027. You "play" as Mr. Rook, a 38-year-old substitute teacher with two divorces and a midlife crisis under his belt (and long, flowing purple anime hair, no less). In his new position, Mr. Rook soon familiarizes himself with the school's computer system, which allows him to to track all social networking interactions that his students engage in. This invasion of privacy goes unbeknownst to the students, and is intended to prevent cyber-bullying and other high school issues. The story forms around Mr. Rook's attempts to help or hinder his students—without revealing his digital surveillance powers.

The mechanics of the game, and of NVLs in general, are almost nonexistant. The characters talk, the player clicks the mouse to advance the dialog, pausing to check the students' online activity (which you can do mid-conversation without any conversational hiccups) or make a multiple-choice decision every so often. These choices are the only element of the game that could be referred to as "gameplay", and the choices are surprisingly thought provoking. I found myself agonizing for a good long while, much longer than poor Mr. Rook would have (life needs a pause button), and being alternately surprised, delighted, and horrified by the results. 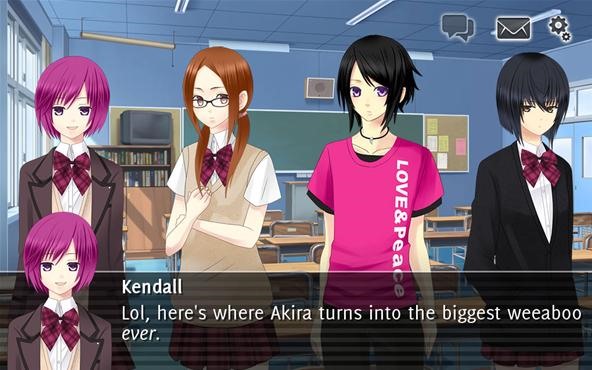 The game took me about four hours to complete, and has three possible endings. The storytelling was strong, but seemed to progress in fits and starts. Plotlines would be dropped for several chapters without explanation, and some of the characters were not likeable or even unbelievable, but I was compelled enough that I plan on playing again, in attempt for one of the other alternate endings. The choice system is implemented quite well, and used seldom enough that I was often provoked into giving serious thought to each decision. I have to do another playthrough to see how much impact the choices really have, but there was one moment where I felt threatened (for Mr. Rook!) and, through a series of decisions, appeared to save him from being fired. In all, the game was satisfying not because I pulled off an elaborate series of button combinations or thought 40 moves in advance of a rival (as is the case in most video games), but rather because my instincts and knowledge of people guided me to the right social choice.

DTIP offers a different type of gameplay than many gamers are used to, and if you're not a reader, you may not like it. But if you like novels, video games, anime, or any combination of the above, check out DTIP.

Looks like a fun game, though I'm going to TRY and get him fired.

You will have ample opportunities to push poor Mr. Rook in that direction.